March 04, 2011
I was a little dismayed when a few weeks ago I discovered that someone had already used my title for my beloved book The Horse Charmer. Now, I came up with this title when I was 14 (you do the math :-) ) and there weren't any books with titles like it. In fact, when The Horse Whisperer came out, I was all upset that he had stole my title. LOL I again did a search about five years ago when I decided to pull out my old draft and redo it - still no one with the title. Yes, five years ago, I know I took forever on this book, but I wasn't actively working on it the entire time.

If I had been smart, I would have checked up on the title again this year. I would have discovered a chapter book in a pretty well known horsey series where the subtitle is none other than The Horse Charmer. Now I had to decide. Would I change my title or keep it? Granted this wasn't the main title it was a subtitle in a series.

My title is very tied to the plot of my story so I decided I couldn't just change it. Though I got several funny suggestions from the fam. I believe the favorite was The Butt-Head Charmer (anyone with a horse will get the joke). I decided I didn't want it identical, but would change it dropping the The from The Horse Charmer.

Horse Charmer needed a new cover to reflect the title change. Thank you Tamra Westberry for the super fast work and understanding in fixing the title for me. 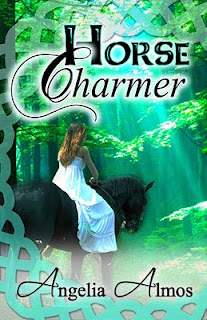