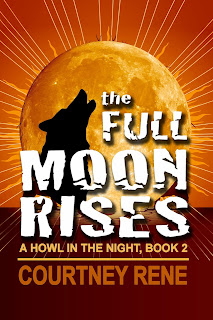 I'm very excited to share that, the sequel to A Howl in the Night by Courtney Rene, The Full Moon Rises is here!

Life as a shape shifter is not as easy as it would seem, especially not for Abigail Staton. Being a teenager and a shape shifter is even harder, not to mention being one of the last remaining females in the two competing wolf clans and the only girl in her new schools. Striving to find where she belongs, gets sidelined when an old threat to the wolves resurfaces. The clans are forced to come together in a semi-truce, and the already dominant males become even more controlling in trying to protect their own as well as their secret. Abby finds herself in the middle yet again, but this time, she will need both clans in order to survive.

I'm happy to host Courtney and learn more about her new book:

1. What was the spark or initial idea that started your book?

I started out writing horror stories.  It has always been one of my favorite genre’s.  But somewhere along the way I began writing less horror and more drama type books.  This series was a way of branching the two types of genres together.  It is a bit horror-esq as it’s werewolves, but it’s also Contempory as it’s about teens finding their way in their own worlds.

2. What was your favorite part of writing this book?

My favorite part was the end.  I don’t want to give it all away but I struggled with how to get Abby, my main character, out of the corner I’d backed her into.  I didn’t want someone to have to save her, as she’s a strong girl all on her own, but I also wanted her to struggle with the idea of not being able to save herself all the time.  Sometimes you have to ask for help.  It as fun working out different scenarios and then figuring out which one worked the best.

3. What is your favorite line from your book?

This one is easy.  It makes me laugh every time I read it.  “Stupid Derek and his stupid gorgeous face were my last thoughts before I finally allowed sleep to claim me”  I swear you can hear the frustration in these words even without the background leading up to it.  Yes, it still makes me laugh.

4. What movie or television show would you say is most like your book in tone, topic, and/or characters?

I have been thinking about this question all week long and it’s a hard one.  I guess it could be Twilight, but I hate to compare to that book, as it’s not really the same.  I think Bella is a  very weak girl and it annoys me.  So, then I guess it could be Harry Potter, as Abby was thrust into a world she was oblivious too and made to adapt.  Yes, I think I will go with Harry Potter.  Although, nothing really compares to Harry Potter.  Not really.

5. If your book was made into a movie and you got to design the movie poster, what would the tagline say?

The Full Moon Rises – Bad things Happen in the Dark.

The Full Moon Rises is available for only $.99 right now from Amazon.

Check out Courtney's other books at http://www.courtneyrene.com/.
$.99 a howl in the night courtney rene new release the full moon rises