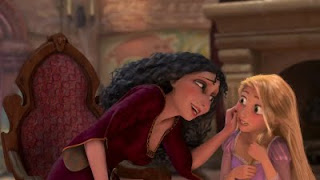 I've been wanting to do a blog post on Tangled since the first time I saw the movie in the theater, but I couldn't decide what topic to cover. Honestly, this is one of those movies which does so many things right that it is a pure joy to watch and study (not just watch for enjoyment). I finally decided I would do a series of posts covering a few different topics instead of trying to cram them into one post. Spoilers will follow.

Onto the lesson and one of the deepest parts of the movie. Rapunzel and Mother Gothel's relationship.

The emotional abuse aspect is something I don't recall ever seeing in a Disney feature (if you can think of one please let me know). This relationship is so well orchestrated in showing the true insidiousness of an emotionally abusive relationship. How Mother Gothel subtly and not so subtly insults Raunzel to keep her dependent on her and doubting herself. How she appears to care for Rapunzel while insulting and frightening her. Listen to the dialogue in these scenes. How Rapunzel laughs off the insults when Mother Gothel sing songs "Just kidding." The scene in the mirror is particularly telling as we not only have Mother Gothel doing her thing, but it shows us how much Rapunsel wants her mother's approval (and yes, she's not her real mother, but Rapunzel thinks so). My favorite part by far is when Mother Gothel yells at Rapunzel, but then turns the tables by collapsing in a chair and sighs "Great, now I'm the bad guy." Which she is, but anyone familiar with emotional abuse knows the abuser will often use phrases such as that to victimize themselves after such a scene - you made me loose my temper, I was just telling the truth, etc.

I'm not sure how I can use this lesson yet, but if you are working on any stories where you have a character being emotionally abused I highly recommend you study the dynamics of Mother Gothel and Rapunzel's relationship.