January 06, 2011
I decided to play around with designing a cover for The Horse Charmer. With Jumping Thoughts I discovered it is really a matter of trial and error for me to find the right image, picking a font for lettering, and moving it around to get it right. Lucky for me with the ongoing e-book craze covers are getting simpler. What looks great on a hardback doesn't necessarily translate to a thumbnail image. Simple is better now. And in my research last night - translate to: trolling Amazon's site to look at young adult fantasy covers - I discovered that covers are a heck of a lot simpler now. They tend to be dark (but this could be because of the vampire craze) with a single object image or person(s) image with big lettering for the title and author. Makes me a little sad as I've always been fan of the artwork on covers. Some seriously great stuff has shown up on a book cover.

Okay, got off track there. Here is my first attempt for The Horse Charmer 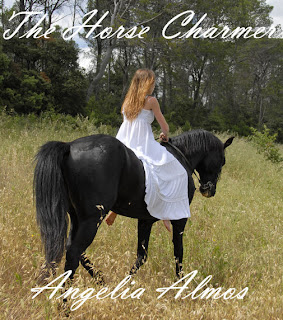 Looks pretty, but very, very simple. I also don't think the font is quite big enough though I like the script since it is a fantasy novel. If you downsize the image the title and author name are harder to read. since the text isn't thick. 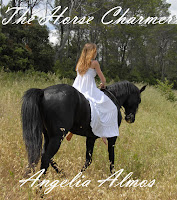 Back to the drawing board....