Lessons from The Secret of NIMH 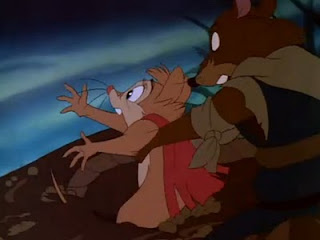 I remember watching The Secret of NIMH when I was a child. Don't remember exactly when, but I do remember being terrified by this movie. I recently rediscovered it thanks to Netflix Streaming. Both of my girls were insistent on watching it overruling my cautions of it being frightening. Thankfully, both of my girls weren't frightened by it as I was, but then again I was one of those kids who got sucked into movies (I still can't watch Bambi and have a hard times sitting through E.T.)

What I noticed as an adult is what a wonderful character study this movie is. Mrs. Brisby is intent from the beginning on saving her children. The family must move as the field they reside in is about to be plowed by a farmer, but they can't leave because her sick child will surely die if moved and exposed to the elements. Thus her journey is launched.

This movie is a perfect example of an everyday character doing extraordinary things despite the fear and terror she feels. Several sequences throughout the movie show her very real fear and that she will act despite her fear to protect her children and to honor the memory of her late husband who she discovers was regarded as a hero throughout her small land.

The climax is particularly powerful as her children are about to be suffocated because their home is sinking in the mud. Mrs. Brisby fights to keep the house afloat and in the end won't leave the house as it is sucked under even though she will die as well because she will not stop fighting to save her children. The rats must pull her away from the house despite her struggles to remain with her children (the picture above). It is this love and devotion which allows her to save her children in the end.

Some stories require characters who act without fear (The Bourne Identity, The Mummy, etc.) and we love those heroes who do what they must and set any fear they might have aside. But don't forget the characters who aren't fearless, but act despite their fear.