30% Off The Beast's Redemption 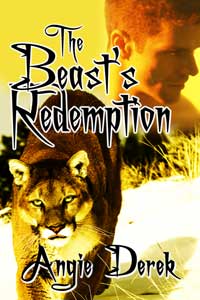 The Beast's Redemption by Angie Derek

Cursed shape shifter, Alexander Léandre, is resigned to his fate, but that doesn’t stop him from hunting down the descendants of the sorceress who bewitched him in hopes of obtaining a cure.

Belle Beaumont is used to men never looking past her curvy figure and pretty face. She dutifully agrees to befriend Alexander in order to protect her father’s herbal company.

A single touch changes all. Passions flare. When Belle discovers what Alexander is truly after and why, will she accept him for what he is? And will her love and family knowledge be enough to break a hundred-year-old curse?


The secret smile affected him much more than the practiced ones she’d already given him.

“When are you going to start asking me questions?” he asked.

Belle cocked her head and pursed her lips. His blood spiked, the talisman warmed, and he pulled back from his baser instincts. This was getting ridiculous.

“What am I supposed to be interrogating you on, Mr. Léandre?” Belle’s voice was slightly breathless.

His blood responded even while his brain told him she did it on purpose. “Why did you agree to have dinner with me?”

“You’re interrogating me, now?” She shrugged. Her jacket shifted, revealing the curves he’d been trying to see earlier.

He wasn’t sure he could make it to the restaurant before he ravished her and that pissed him off. There had to be magic at work here. He shouldn’t be reacting to her as deeply as he was.

He had to touch her even if it was a mistake. Alexander shook his head and reached out to slide a finger along her thigh. He noted with satisfaction her heart speeding up at the contact. “I didn’t ask.”

“Okay, you threw down a challenge. Why did you?”