A Year in the Life of a Short Story 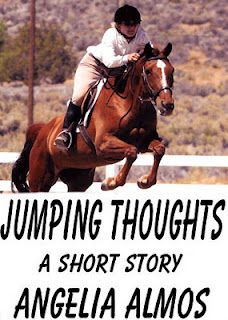 It's been one year since I released Jumping Thoughts into the big bad cyberworld. The story originally appeared in Ride! Magazine in 1997 and had been sitting on my computer gathering cyber dust. I've been going over my sales for the year to see how it did. And I was very pleasantly surprised. I honestly wasn't expecting a lot from the story. It was my practice book to get comfortable with all the different e-publishing formats, cover design, and everything else.
I wonder if it is the $.99 price point which keeps it selling as there aren't a lot of reviews for it. One 5 star on Amazon, but no where else. And sales have been steady over both Barnes and Noble and Amazon (in fact, it's about 45%/55% with Amazon in the lead). I haven't had any sales on the other platforms (though I am still waiting on numbers for the last half of the year for Apple and Sony).
My best sales were in January 2011 (release month) hitting double digits. February was a close second. It's dropped down to selling a couple of stories a month. I had guessed that Whitelighter written under my pen name Angie Derek was my best opening month sales, but in running the numbers, Jumping Thoughts beat out Whitelighter by a single sale. I had no other titles other than Horse Schools for sale at that point. No other ebooks or fiction for sale. I didn't do any promotion for the story other than listing it on Facebook, Twitter, my blog, and my website.
I don't really have any conclusions after looking over the numbers. I think I need more titles to run numbers on and the next one will be Horse Charmer in May (once it has been out for a full year).
Available through Sony, iBooks, Diesel eBook Store, Smashwords, Barnes and Noble, Amazon

.
An additional note - After I originally composed this post in the beginning of January Jumping Thoughts hit three Kindle bestseller lists. I'm not sure how the bump initially occurred, but it is certainly interesting to watch the sales climb from being on the list. As of 1/12/2012, Jumping Thoughts is: