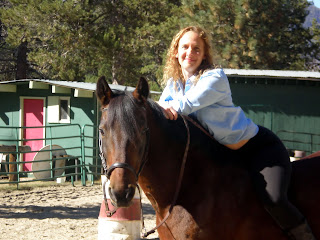 I know it's been a while since I've done a post on Prince and there's a very good reason for that. I don't have a lot to report except that I hurt my back and neck in January and reinjured them shortly after they healed in February. I've been pretty much land locked since then.

As so many of us athletes do (you know who you are) I tried to ignore the injury, doing everything I would normally do, living with the pain and when it would get too intense take some advil. That went on for a couple of weeks until my body had enough and I had to ground myself since I could barely function. Went to a massage therapist and chiropractor who helped a lot and got me back on the right track. But it took a lot longer than I guessed for my back and neck to recover.

I've ridden a few times, short test rides, to see if my body is ready. And so far, no.

But Prince remains in half-training at his stable so he is still getting ridden a couple of times a week by the trainer. And it is going well. He's a lot less spooky than he used to be for the few minutes I've been able to ride. I have hopes April will have lots of riding and if we get a real spring without any snow I might even be able to bring him up the mountain and see how his schooling will translate to the big bad world of riding on real trails.
angelia almos horse prince charming