March 09, 2013
Content warning: Both of these movies are R and contain swearing and lots of gross violence. Though none of those images are displayed or talked about in this post. 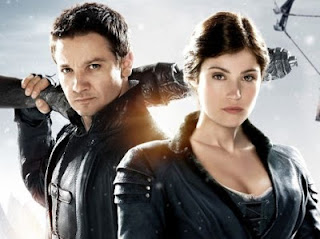 I was touched and inspired by the relationship between Hansel and Gretel in Hansel & Gretel: Witch Hunters. Though you know they're siblings going into the movie I was surprised at the fondness and devotion they have to each other. The actors and screenwriters do an awesome job showing their dynamic.

Though there are several scenes where you can see their siblingness. My favorite has to be about halfway through the movie. Hansel and Gretel have been separated during a night raid and both stumble across the same cabin in the middle of the woods. They attack each other at first (not knowing who they have run into), but quickly realize who they are fighting. Hansel looks clearly into Gretel's face and sees that someone has attacked and beat her. The injuries are focused on her face and not from a normal scuffle. He asks at first if she is okay, then you see his anger rise, and he asks who did this to her. She doesn't answer - her reluctance clear. And he hugs her in relief - even though injured, she's safe with him now. It's a short interaction - maybe one minute - and shows the devotion they have toward each other.

This movie got me thinking about sibling relationships in the action/adventure. They bicker a little, but are mostly a well-tuned team who know each others strengths and weaknesses as they do the one thing they believe they were put on earth to do.

Shortly after the movie I got to thinking about another action/adventure movie that had two siblings working together toward defeating a great evil. In fact, despite the movie's faults, it is one I really like, because of the sibling relationship. In this one, they aren't a well-tuned machine, but estranged.

Doom features Reaper and Samantha. The soldier and the scientist. They argue and bicker and are coming to the problem from two different angles. But in the end they are a team and you know that they will each do whatever they have to do protect the other despite their differences. This is another sibling devotion relationship that is shown through subtle mannerisms between the actors and key lines from the script.

I have yet to write a story where the sibling relationship is the focus of the story, but both of these movies give me plenty of inspiration and lessons for when I have a story where a brother and sister will be center stage.
lessons from movies