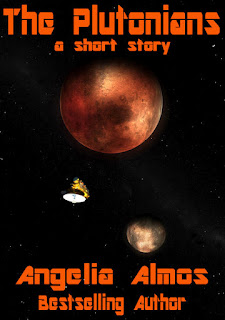 The Plutonians by Angelia Almos. A science fiction short story.

Adalena, a Plutonian, has lived undercover with her team on Earth for over one thousand years. But when the New Horizons automated spacecraft arrives at Pluto and takes pictures of one of their cities, she knows everything is about to change.


Available as an ebook from Amazon, Barnes and Noble, and Smashwords.

“They found life on Pluto!"

The shout went out on July 15, 2015 at 1800 hours. And my life would never be the same. I turned to look at the giant screen television mounted over the bar in the busy restaurant. The New Horizons robotic spacecraft had captured a perfect picture of Pluto. But the image wasn’t of just an empty planet. It clearly showed our ancient city on the surface.

I was horrified. There might not be Martians, but Plutonians are very real. I’m a Plutonian and have been on Earth for over a thousand years. A little genetic nip-tuck here, a little genetic manipulation there, and my kind can pass as human. It was easy for us to transition except for our longevity. Since one Plutonian year was roughly 248 Earth years I had only aged about five of my years since stepping on Earth soil. Someone bumped me and I realized I’d been staring blindly at the television. If the robotic spacecraft was close enough to see one of our ancient cities then those on Pluto could see the spacecraft. It had been so long since my team had contact with our home planet.